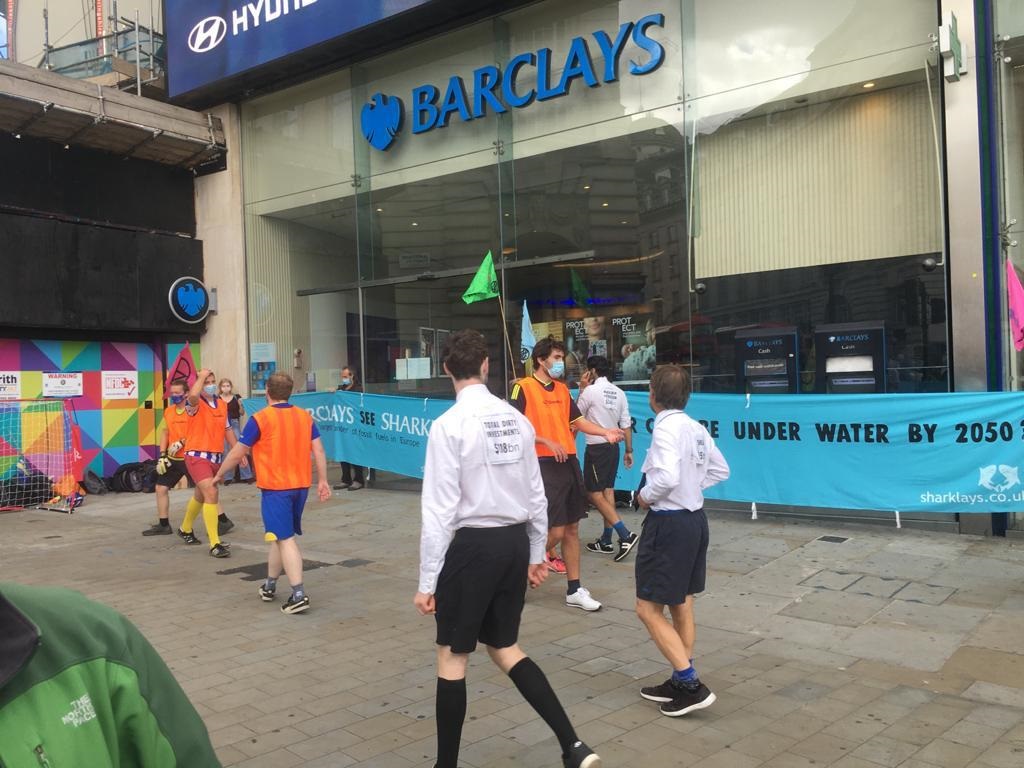 A mock football match staged outside Barclays' flagship Piccadilly Circus branch has turned the floodlights on the bank's cynical exploitation of the beautiful game. Barclays proudly boasts of its status as Official Banking Partner of the Premier League and sponsorship of the FA Women's Super League. But away from the terraces, the bank's activities are helping ensure that by 2050, a quarter of English league clubs will be flooded every year, destroying club finances and forcing supporters away for weeks or months.

Tifo Football's video, Will Your Football Club Be Underwater in 2050? explains how accelerating climate change, driven by CO2 emissions from fossil fuels, is on track to flood grounds, create impossibly hot playing conditions, and disrupt major sporting fixtures around the world in other ways as already witnessed with the 2019 Rugby World Cup and the 2019 Australian Tennis Open. And yet, despite its purported support for football, Barclays is pouring more money into fossil fuels than any other bank in Europe, helping ensure CO2 levels continue to climb and the game's future thrown into havoc.

The match saw Extinction Rebellion FC against a Barclays team using the bank's 'Sharklays' soubriquet, made up of players bearing the names of the heavily-polluting giant companies Barclays has financed in recent years. As unequal a fixture as it may seem, Extinction Rebellion FC's manager was optimistic prior to the match, with this assessment of the opposition:

Everyone knows what they've achieved in the game - the vast profits, their massive global influence - but on the pitch it's eleven against eleven, and we fancy our chances [...] we'll be looking to unlock their corporate defence and hit them where it hurts - by urging their employees and customers to demand that Sharklays tells the truth, acts now and shows some real leadership in the climate crisis. With a quarter of our football pitches due to be underwater by 2050 due to climate change - including Chelsea, Fulham and West Ham in London - we've nothing to lose.

As bleak as the outlook for sport will remain unless fossil fuel funding is stopped, with climate change, the stakes are far higher:

This isn't just about losing wonders of nature. With the loss of even the smallest organisms, we destabilise and ultimately risk collapsing the world's ecosystems - the networks that support the whole of life on Earth.