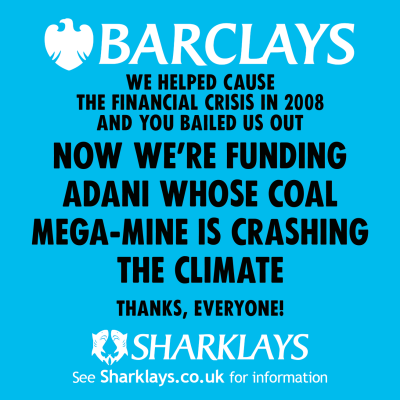 A vast, unwanted new coal mine in Australia

Ten years ago, billionaire mining giant Adani bought a licence to dig the largest coal mine in Australia’s history. So far, only people power has stopped this climate-wrecking coal from being dug up.

Adani’s Carmichael coal mine will unlock the Galilee Basin - one of the world's biggest untouched coal reserves - paving the way for many more coal mines to be built, all at a time when scientists are warning we can't build any more fossil fuel infrastructure if we want to avoid catastrophic global heating. Adani’s mine, rail and port project will destroy the ancestral lands, waters and cultures of Indigenous people.

Along with other banks, Barclays had pledged not to fund this mine, prompting the Adani Group to claim it will 'self fund' its construction. Meanwhile, Barclays is helping it raise vast sums ostensibly for Adani Ports, but which can very readily be used to finance other operations - such as a new coal mine that no bank will publicly touch. If Barclays is serious about not funding these destructive developments, it must stop funding the Adani Group.

More about the mine and its consequences is shown in the video below. Alongside ways you can pressurise Barclays, you can help fund the fight against it here.