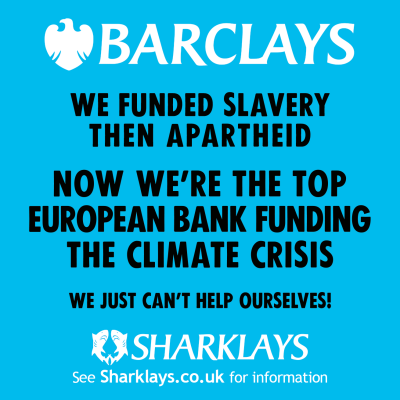 Barclays may not be the only bank with origins in financing slavery, but it is certainly distinguished by the substantial connections it had to South Africa's apartheid regime, such as purchase of defence bonds and a Barclays director on the government-appointed defence advisory board. Some have suggested that this colonial mindset persists in Barclays' bankrolling of fossil fuels driving the Climate Crisis, which is already ravaging the least economically-secure countries of the world, where "those that have done the least to cause the climate crisis are paying the greatest price."

Even discounting that international injustice, the 3 or 4°C of global temperature increase likely unless drastic and immediate steps are taken to cut CO2 emissions and transition away from fossil fuel use should concern us all - particularly in a year that has seen record breaking temperatures in Australia with ensuing catastrophic bushfires, drought hitting wheat in Russia and the UK, a record 16 wildfire and extreme weather events hitting agriculture in the US, each costing over $1 billion, and plenty more besides. All the more reason to put pressure on the bank that is the biggest funder of fossil fuels in Europe. Whether you have a Barclays account or not, there are things that you can do - but if you have a Barclays account, visit switchit.money to find a better bank.