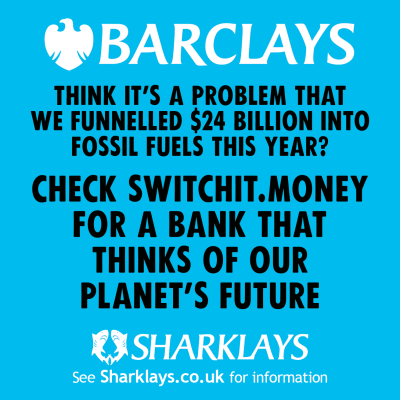 Move your money out of wrecking the climate

In 2020, under increasing pressure, Barclays introduced policies claiming to help tackle the Climate Crisis and bring its activities in line with the 2015 Paris Agreement. The policies are considered largely meaningless and with no real effect. In fact, the authors of Banking on Climate Change 2020, in an interim briefing released in November 2020, found that Barclays ploughed $24.58 billion into fossil fuels between January and September of that year alone - an increase on the same period in the previous year.

If you have any money with Barclays, move it away from a bank making short-term profits from wrecking the future. Switch your current accounts - see switchit.money - and take your investments elsewhere.