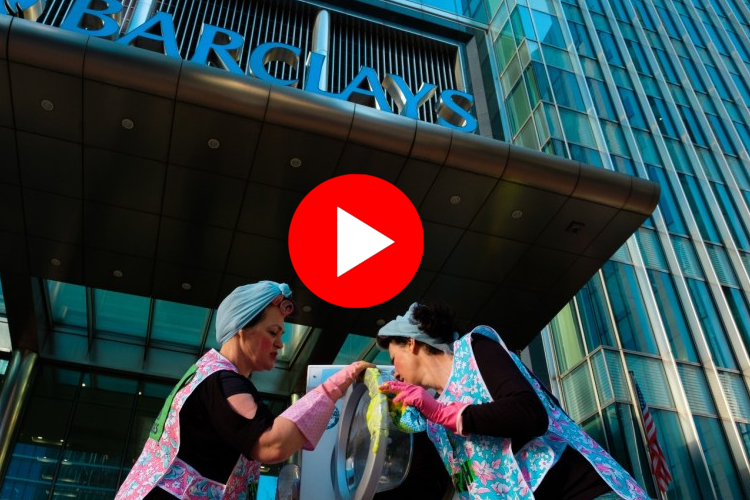 Barclays shareholders may have been unsurprised to find that the 2021 Notice of AGM arrived with a 1,000-word statement from the board aiming to persuade them not to vote for the Market Forces resolution that would require the bank to begin taking real action on climate change, rather than more greenwash (a statement subject to this detailed and excoriating rebuttal). But shareholders may yet rebel in even larger numbers than for the previous year’s resolution from ShareAction, given the increasingly-visible condemnation of Barclays financing climate breakdown. A theatrical ‘clean up your act’ stunt alone as pictured above might not worry the board, but along with coverage in national tabloids of the ‘better broken windows than broken promises’ intervention at Barclays’ HQ, more Telegraph reporting of accusations against the bank, a 38 Degrees campaign, SumOfUs enabling people to email pension fund managers about the resolution, and more besides, it is difficult for the public in general and shareholders in particular not to be aware of how much Barclays needs to change. Will large shareholders play along with the bank’s greenwash, or make the financially and environmentally responsible choice to support the Market Forces resolution?