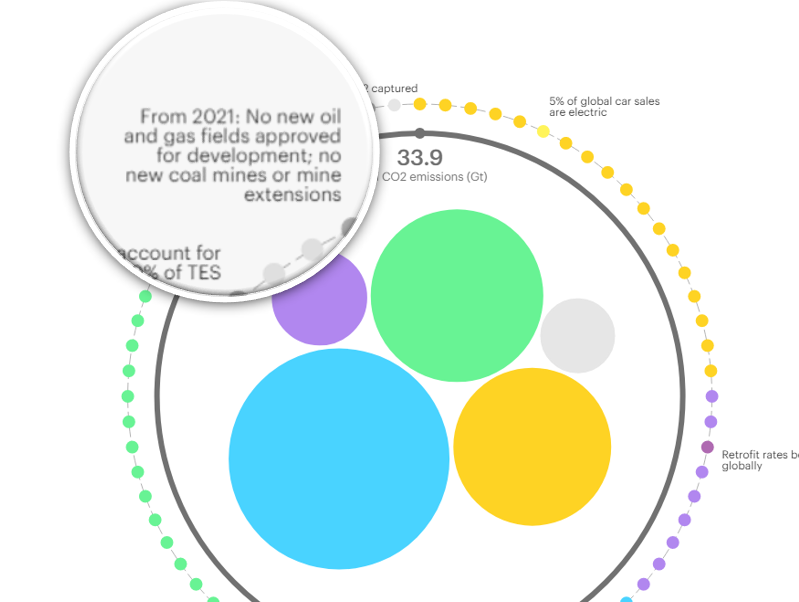 The projections produced by the International Energy Agency (IEA) have for years been used to justify fossil fuel expansion plans. The IEA's misleadingly-named Sustainable Development Scenario, for example, claims compliance with the Paris Agreement – despite featuring very little reduction in oil and gas use before 2040 – largely by assuming non-existent carbon capture technologies will be invented and deployed at massive scale. This provides fossil fuel companies with a convenient rationale for expansion well into the future, presented at conferences like this.

And not only fossil fuel companies. The net-zero ‘ambition’ announced at Barclays’ 2020 AGM was followed later by detail of reduction targets and a transition path all claimed to be Paris-compliant, since they were based on the SDS. Unsurprisingly, then, Barclays’ targets for reducing fossil-fuel financing have remained hopelessly inadequate, while its BlueTrack methodology includes ‘intensity’ reduction targets that could be met with no actual emissions reductions at all.

In its 2020 World Energy Outlook, the IEA finally introduced an alternative scenario, Net Zero Emissions 2050 (NZE2050). Despite being something of an overview and not included in all sections of the report, it showed very clearly how much more drastically reductions must be made, compared to SDS. But when challenged to update its own reduction targets accordingly, Barclays has repeatedly insisted that only the SDS offers a “sufficiently high-resolution dataset” to meet their needs – a curious assertion, since an alleged lack of information from the IEA hasn’t prevented more responsible banks from taking obvious steps such as setting a deadline for ending thermal coal financing, something Barclays has notoriously failed to do, despite pleading from the UN Secretary-General.

However, the IEA has now released a fully-fledged version of NZE2050, and it makes uncomfortable reading for Barclays. Recognizing that the pathway is narrow – but still achievable, if governments act now – it specifically rules out development of any new oil or gas fields, as well as any new coal mines or extensions. For a bank that recently increased funding for fracking, tar sands and arctic oil by 32%, that prohibition sends a very clear signal. At its recent AGM, discussing the shortcomings of the SDS versus the then-limited NZE2050 data, Barclays’ board claimed to have been “very open with the comments on the weaknesses in what we do at the moment, and our desire to move to a better place, as and when we have something that is that is workable”. Unless Barclays now goes much further, much faster in ending fossil-fuel financing, it will have some very difficult questions to answer – not least from its own shareholders.