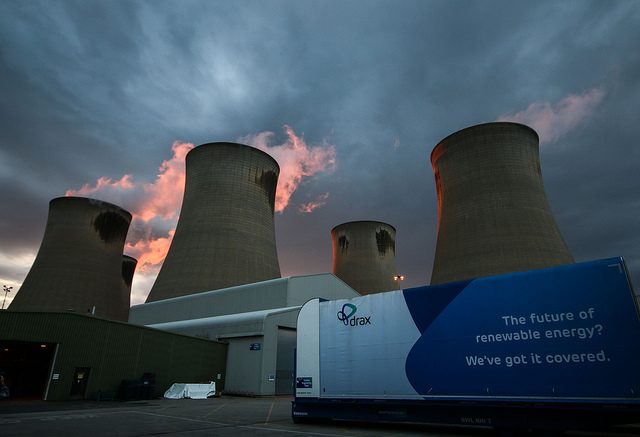 Increasing recent attention from the BBC and others about the environmental impact of Drax power station makes uncomfortable reading for those financing it – particularly Barclays, whose long association with Drax Group plc includes the £300m facility shown in the group’s most recent Annual Report. An analysis of power plants shows its burning of woody biomass makes Drax the biggest single emitter of CO2 in the UK, and third biggest in Europe – as well as producing large amounts of dangerous particulate matter. All this while costing billions in subsidies, since the UK government considers biomass renewable and even excludes the emissions from its total in climate change accounting.

Why is this particularly awkward for Barclays? Much has been made of how the bank’s attempt to ‘green’ its image has contrasted with its actions – one year, committing to align its financed emissions with the Paris Agreement, then increasing its funding of fossil fuel companies; the next year, promising to help accelerate the transition to a low-carbon economy, then financing the fossil fuel industry more than any other UK bank; and so on. But providing services to a seemingly-sustainable power producer like Drax is just the kind of useful fig leaf (not to say, greenwash) that can be held up as supportive of the move to renewable energy. Barclays’ own policies make it clear that they should consider whether its services help “further the goals of the Paris Agreement” before offering them.

So, the growing evidence that biomass is in fact more likely to push those goals further out of reach (CO2 drawn-down from tree regrowth is slow; market demand for biomass encourages the clear-felling of forests where not well-regulated) is unwelcome news for Barclays, not least given the bank’s other associations with profligate deforesters. Not for nothing has Drax Group plc been dropped from the S&P Global Dow Jones index of green energy firms. What’s more, although particulate emissions from Drax don’t currently exceed legal UK limits, the World Health Organisation states that there is no safe level of particulates in the air, and this kind of pollution is known to cause upwards of 29,000 premature deaths each year in the UK.

For now, Barclays can point to both UK and EU biomass policies as justification for its relationship with Drax. But with hundreds of NGOs and scientists calling for those policies to change – not to mention major campaigners – Barclays may wish to review that relationship sooner rather than later.