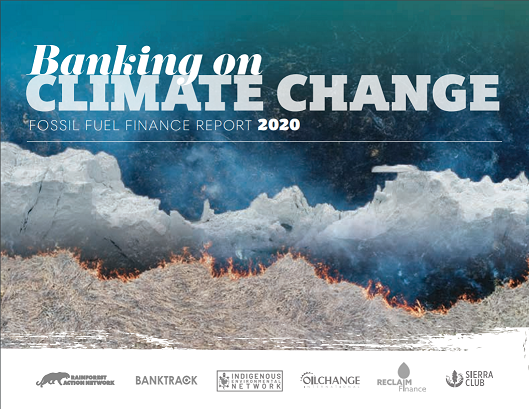 Sevenfold rise in Barclays’ tar sands financing from 2018 to 2019

Following the 2019 Banking on Climate Change report, naming Barclays among the leading banks backing ExxonMobil, Teck Resources and Enbridge to expand tar sands production, but indicating a significant drop in its 2018 financing of the sector compared with previous years, the 2020 report shows a sevenfold increase from 2018 to 2019 – $84M to $576M – of Barclays financing for the top tar sands production and pipeline companies. This contrasts with comments in Barclays 2019 Environmental and Social Governance Report, where the ‘oil sands’ sector is described as “a very small business for us” and “not a business which we have an ambition to grow”. The large increase may help explain why Barclays’ proposed Paris-Agreement-alignment resolution for this year’s AGM is so unambitious with respect to tar sands, despite analyst findings that “no new oil sands projects fit within a Paris-compliant world” and that the resulting Canadian oil production would use up “16% of the world’s carbon budget to keep temperatures below 1.5 degrees”. At the AGM, shareholders will have an opportunity to vote for a more coherent resolution filed by ShareAction.