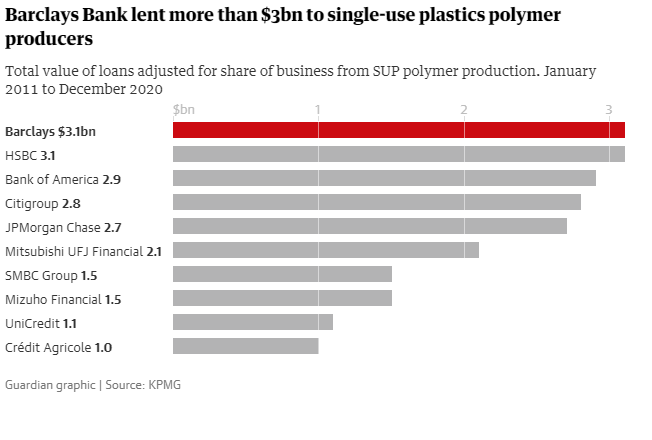 A recent Greenpeace video brought to life the shocking scale of the UK’s contribution to the plastic waste problem creating an environmental catastrophe. Be it choking oceans, releasing carbon emissions when burnt, or infiltrating our food and water as microparticles, single-use plastic creates some of the world’s most pervasive pollution problems. So, is recycling the answer? That’s certainly what the manufacturers of plastic – oil and gas companies – want us to think. But they have known for decades that plastic recycling could never be practical, and neither would they want it to be; it’s much more profitable for them if people buy new plastic. To make matters worse, as energy sources shift to renewables to tackle climate change, oil and gas companies expect to be able to maintain demand through more plastic manufacture.

But who would finance companies following such a strategy? Barclays tops the list of banks in a Guardian report on analysis of twenty companies that produce more than half the world’s plastic waste. Only 10%-15% of single-use plastic is recycled globally every year, and a “small number of petrochemicals companies, and their financial backers, […] generate almost all single-use plastic waste across the world.”

At its recent AGM [], the Barclays board took pains to emphasise its newly-formulated purpose: “We deploy finance responsibly to support people and businesses, acting with empathy and integrity, championing innovation and sustainability, for the common good and the long term.” No bank would be so heavily invested in companies producing resources whose historic market is set to dwindle, without a keen awareness of their future strategy. If Barclays’ ‘purpose’ statement is in any way meaningful, it may be time to review its relationships with those companies.